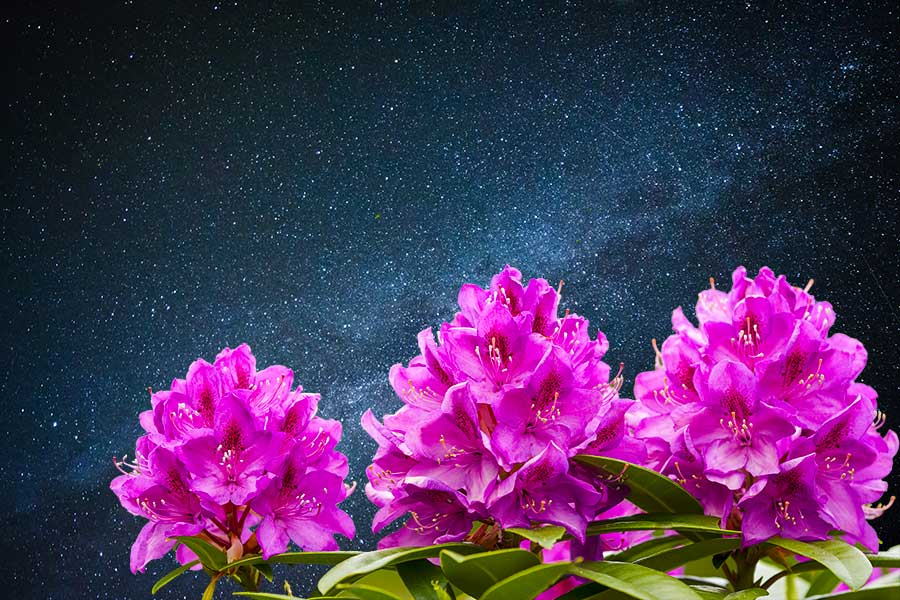 Many years ago, I thought about writing a book about spiritual awakening. I had no idea what to write or how to describe such an event that is frequently recommended as the healing salve for our ills, the answer to our bad habits and compulsive behaviors, and the bedrock of character development, which hopefully takes place throughout the course of our lifetime.

The title for this came to me in a dream … Stardust and Magenta Flowers. Then I got busy writing Many Blessings: A Tapestry of Accomplished African American Women, and the spiritual awakening book was tabled until now.

Spiritual Awakening is something that cannot be taught. It is an individual experience that can occur very gradually, or seems to come in a flash. The catalysts for this deeper awareness of one’s life’s meaning and purpose are many, but the end result is a universal striving for closer contact with the Higher Power or Energy of the Divine, ethical behavior and character development, and a desire to be of service.

And so, I will begin at the beginning of my story of Stardust and Magenta Flowers, which will appear as a monthly offering in blog format on my website and elsewhere. I will be offering vignettes from my personal experience that I hope will be helpful, instrucional and/or inspirationl to you. I hope you ejoy them.

When I was a little girl, my family lived in Southern California in a tiny house in a tiny beach town. It has now become the very glamorous, Newport Beach. But, at that time, it was a sleepy little town near the ocean. There weren’t many streetlights, and the houses were few, with lots of open space to play in. Because of the scarcity of streetlights and city lights, the night sky was resplendent with stars. The Milky Way was easy to spot and my dad, who was a Marine Corps night fighter pilot, was always pointing out the constellations and the North Star to us children.

My mother had been a Girl Scout in her own growing up and was determined that I should be one too. To that end, she volunteered to be a Brownie leader for the girls in my 2nd grade class. There were eleven Brownies in our troop. Each Monday, all the little girls in the Brownie troop came home with me on the school bus for our meeting. We wore our Brownie uniforms with our pins pinned over our hearts and our beanies on our heads. Mother and her co-leader, Rita Elleboudt, would have a program of one sort or another planned for their charges, and often it had some connection to learning about the natural world.

On one particular “Brownie” day, Mother asked her brood to name their favorite color. One by one, the girls named their favorites … red, purple, blue, green, pink, and so on. I was last, and when it was my turn to say my favorite color, I said magenta. My mother was not pleased and probably thought I had said this to call attention to myself, or because I was being difficult (which I could be!). She said that the assignment was to take a walk in the neighborhood and to look for something in nature that was the color we had named and bring it back. If we couldn’t bring it back, we were to describe what it was and where we had found it. She said that I wouldn’t be able to find anything that was magenta and that I should choose a different color. But, magenta really was my favorite color and I said that I would be able to find it.

My secret was that I already knew where there were bushes at the very end of the street that had little magenta flowers on them. I got a disapproving look from her as I set about to prove her wrong. With smug determination, I trotted off down Serra Drive to retrieve the magenta flowers.

What does any of this have to do with spiritual awakening, you might be wondering? Well, it is a scientific fact that all of matter on planet Earth is made of stardust. You and I and everything we know of, was once stardust that mysteriously took form and became what it is. This represents the concept of universality. There are perennial wisdoms and truths that are universal and translate cross-culturally. There are ways in which we humans, for example, are all the same. And so, with regard to Spiritual Awakening, there are aspects that are universal.

As I said earlier, all Spiritual Awakening results in a desire for closer contact with a Higher Power or a Divine Energy, and a striving for ethical conduct, character development and a desire to be of service in one form or another. So, Stardust represents this aspect of us that connects to the entire universe and the wisdom of the ages that knows no separation.

On the other hand, magenta flowers represent our individuality. Each of us has our own particular spiritual journey. Perhaps you practice a particular religious tradition that serves as a vehicle to the Divine. Maybe you have rituals and/or practices that thicken the spiritual energy around you and allow you to feel that contact with the Mystery. And, you have probably had spiritual experiences that are difficult or impossible to explain to others because they are so deeply personal or beyond explanation.

Whatever the case may be, a spiritual awakening is some combination of the universal and the individual. And both aspects have often been catalyzed by teachers who come into our lives throughout the course of our lifetime. Because I have had such wonderful teachers in my lifetime, I have decided to share some of what I have learned in hopes that it will be helpful to you in your own journey.

Each month I will post a story from my experience that I think will be of interest to you. I will appreciate your feedback and ask that you send it to drsonnee@aol.com.

Many Blessings to you today and every day!